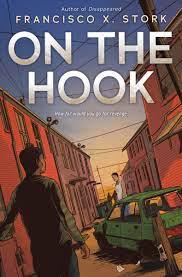 Join us for a discussion with Elisabeth Weed and Francisco X Stork About On the Hook: Hector has always minded his own business, working hard to make his way to a better life someday. He's the chess team champion, helps the family with his job at the grocery, and teaches his little sister to shoot hoops overhand. Until Joey singles him out. Joey, whose older brother, Chavo, is head of the Discípulos gang, tells Hector that he's going to kill him: maybe not today, or tomorrow, but someday. And Hector, frozen with fear, does nothing. From that day forward, Hector's death is hanging over his head every time he leaves the house. He tries to fade into the shadows — to drop off Joey's radar — to become no one. But when a fight between Chavo and Hector's brother Fili escalates, Hector is left with no choice but to take a stand. The violent confrontation will take Hector places he never expected, including a reform school where he has to live side-by-side with his enemy, Joey. It's up to Hector to choose whether he's going to lose himself to revenge or get back to the hard work of living. About the Author: Francisco Xavier Arguelles was born in 1953 in Monterrey, Mexico. Ruth Arguelles, his mother, was a single mother from a middle class family in Tampico (a city on the Gulf of Mexico). The reason Francisco was born in Monterrey rather than in Tampico, where Ruth lived, is that her father did not want anyone to know that she was going to have a child out of wedlock. She was sent to Monterrey to live in a convent until the baby was born. The baby was supposed to be given up for adoption, but Ruth changed her mind. After a while, Grandfather Adalberto relented and mother and baby Francisco were allowed to come home. Six years later Ruth married Charles Stork, a retired man more twenty years her senior. Charles Stork adopted Francisco and gave him his name. Charlie was a kind but strict Dutch man who quickly went about instilling needed discipline in his new son. For his seventh birthday, Charlie gave Francisco a portable typewriter because Francisco announced that he wanted to be a writer. After wandering about Mexico for a few years trying to live on a Social Security pension, Charlie decided to bring the family to the United States where he hoped they would fare better. The three of them came to El Paso, Texas when Francisco was nine. Charlie, an American citizen was able to obtain the necessary visas for Ruth and Francisco. Francisco was sent to grammar school where he learned English on the go. Unfortunately, no one was willing to give the sixty-five-year-old Charlie a job and so it became even harder for the family to survive in the United States. They lived in a variety of apartments and trailer houses staying in each for as long as possible before getting evicted. When Francisco was thirteen, Charlie Stork died in an automobile accident. Ruth decided to stay in the United States. She and the boy obtained an apartment in one of the public housing projects of El Paso. Francisco was awarded a scholarship to the local Jesuit High School and soon rose to the top of his class. During his senior year, he received an Honor's Scholarship (full tuition and living expenses) to attend Spring Hill College, a small Jesuit College in Mobile Alabama. At Spring Hill College, Francisco majored in English Literature and Philosophy and received the college's creative writing award. After college, a Danforth Fellowship (awarded to 40 college seniors out of approximately 5,000 applicants) allowed him to attend graduate school at Harvard University. At Harvard he studied Latin American Literature with people like Octavio Paz, the Mexican Nobel Laureate. However, the emphasis on scholarly research and writing seemed too remote and irrelevant to all that was important. So, after four years of Harvard, Francisco went to Columbia Law School. His plan was to make a living as a lawyer without abandoning his plan to write fiction. Twenty years and twelve or so legal jobs later, Francisco published his first novel. Francisco practiced law for thirty-three years in a variety of private and public venues. For the last fifteen years as a lawyer he worked at MassHousing, a state agency dedicated to financing affordable housing. He retired in 2015 and spends his time writing outside of Boston. Francisco is married to Jill Syverson-Stork. He is the father of Nicholas and Anna and the grandfather of four beautiful grandchildren Francisco Stork is the author of nine novels.